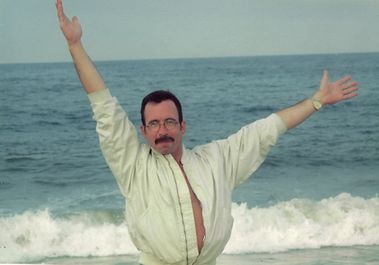 His friends include: Tom Moore,

I had the honor of knowing Greg for 12 years. We first met working as waiters at the original Deux Cheminees on Camac Street. At the end of a shift, he often entertained our crew with a fashion show in one of the dining rooms - featuring the latest outfit he was wearing out that evening. The odd thing was that the outfit never changed - white t-shirt, black leather pants, and black cowboy boots. Later when we worked together as banquet waiters at the Four Seasons Hotel, he would often jump up on the stage during set-up, to belt out a medley of Diana Ross songs, along with Marilyn Monroe's version of "Happy Birthday Mr. President." He was an entertainer at heart, and later a teacher by profession, where he shared his humor, passion, and knowledge to all he engaged. Tom Moore