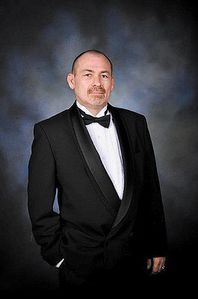 Center City psychiatrist Dr. Phillip Reeves died March 17 after complications of a stomach ulcer. He was 52.

Reeves was a lifelong resident of Drexel Hill and operated a private psychiatry practice at 16th and Walnut streets.

He came to the psychiatry field later in life, following a career as a musician.

After graduating from Upper Darby High School, Reeves studied music at Philadelphia College of the Performing Arts, the predecessor of University of the Arts and Temple University.

Graham Hueber, Reeves’ partner of six-and-a-half years, said Reeves began playing violin as a child, graduated to the viola and later learned how to play the mandolin.

Reeves was the lead string player for Frank Sinatra for more than a decade and played with the music legend on such stages as Lincoln Center and Carnegie Hall.

In the mid-1990s, however, Reeves did an abrupt turn and decided to pursue his other passion — medicine.

He enrolled in medical school at Thomas Jefferson University in 1995 and four years later graduated first in his class in psychiatry.

“He went through the whole cycle in medical school — did rotations in internal medicine, gynecology, all of the fields — and psychiatry was always what he was best at,” Hueber said.

Reeves won Jefferson’s Baldwin Keyes Prize for excellence in psychiatry and also claimed its Teaching Award during his residency.

He initially got his introduction to the field as a tech at Eugenia Psychiatric Hospital in Chestnut Hill. During school, he worked at Lankenau Hospital and Lankenau Cancer Center and, upon graduation, joined the team at the Center for Behavioral Medicine at Pottstown Medical Memorial Center. Most recently, he was working for InterNet Behavioral Care, part of The Progression Companies.

“He was very caring,” said Jay Segal, a psychologist who shared office space with Reeves. “He was compassionate and always concerned about his clients. He was just a really good guy.”

Hueber noted that the same characteristics that inspired Reeves’ passion for psychiatry also fueled other interests in his life.

An avid cook, Reeves put himself through medical school by operating his own catering business and picking up music gigs, and he was also an avid gardener.

“He was a nurturing person,” Hueber said. “Whether it was through entertainment, through feeding people, through helping them sort out their problems and feelings, he was very giving and compassionate. He loved helping people, and he was an excellent listener.”

He served as medical director of the Spirit of Gheel, a residential facility for the mentally ill, and launched a pet-therapy program for children, training his own dog as a therapy pet.

Hueber said that, while his partner passed at a young age, he lived his life to the fullest.

“He reached the top of his profession as a viola player, went to medical school and started a whole second career,” he said. “And then he became a very well-loved and effective doctor. He packed so much into 52 years.”

A memorial service was held March 31 in West Chester.

In lieu of flowers, memorial donations can be made to the Philadelphia Youth Orchestra, P.O. Box 41810, Philadelphia, PA 19101.