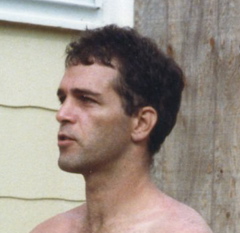 VICTOR R. RASH: (Photo taken by Scott A. Molampy on Long Beach Island, NJ- sometime in the early 90's). Victor rented a wonderful little beach house one summer, a block from the beach, and generously invited many of us down to enjoy the shore together. Many sweet recollections of Victor, much like these golden, halcyon days we shared together at "LBI", continue to resurface...

Our dear friend, Victor R. Rash, was born in Dover, Delaware on January 15th, 1954. Upon graduating from Caesar Rodney High School in 1972, Victor joined the Navy, and was stationed in Charleston, South Carolina and, later, Portland, Maine.

After the Navy, Victor settled in Portland for a time, and shortly after moved to Lewiston, Maine with his partner, Rene. Victor also lived in San Francisco, Wilmington, and later, Philadelphia, where he took up residence for many years.

Victor spent the last several years of his life in New York City (Manhattan), where he lived with his beloved canine friend, "Blaze". After a long illness, with many challenging health complications, our dear, beloved friend, Victor R. Rash, peacefully left his body on August 2nd, 2003 in New York, NY. Victor is buried in the Odd Fellows Cemetery in Camden, Delaware.

Gone With The Wind

Phantom of the Opera

His family and friends include: (type your name here, and names of others):

Victor, nor I, were never actually really big H. W. Longfellow fans... but, since we both spent many years in Portland, Maine (Longfellow's native town- and birthplace) we always shared a sentimental soft spot for his "My Lost Youth" (Longfellow's recollections of his earlier years growing up in Portland). Victor and I were barely 20 years old when we first met. This poem so vividly captures the feeling of Portland, and our own youthful days there together throughout much of the 1970's.

For some reason, this format doesn't allow me to "cut and paste" this endearing poem into Victor's profile ("Thank God", some of you may be thinking!!!), but, in dedication to Victor, I'll just type in the first three stanzas:

Often I think of the beautiful town

That is seated by the sea;

Often in thought go up and down

The pleasant streets of that dear old town,

And my youth comes back to me.

And a verse of a Lapland song

Is haunting my memory still;

I can see the shadowy lines of it's trees,

And catch, in sudden gleams,

The sheen of the far-surrounding seas,

And islands that were the Hesperides

Of all my boyish dreams.

And the burden of that old song,

It murmurs and whispers still:

I remember the black wharves and the ships,

And the sea tides tossing free;

And Spanish sailors with bearded lips,

And the beauty and mystery of the ships,

And the magic of the sea.

And the voice of that wayward song

Is singing and saying still:

(Incidentally, it was always that line about the "Spanish sailors with bearded lips" when both of our faces would erupt into a devilish giggle! -William Arthur Mills/ NYC)