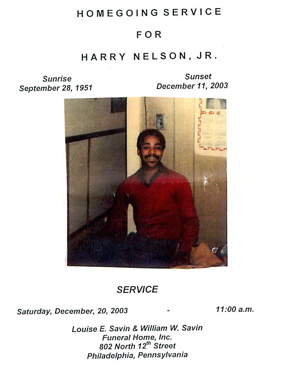 Biography: (from the obituary in his funeral program, courtesy of Tyrone Smith).

Harry Nelson Jr. was born on September 28, 1951 in Philadelphia PA to Harry Nelson Sr. and Evelyn Johnson. He was educated in the Philadelphia Public School System. Harry Wilcher and M. Elizabeth "Liz" Wilcher (Aunt) raised Harry along with her children, Brenda Granger, Malinda Gaymon, and the late Eric Mundy, Sr; they were raised as sisters and brothers. He helped raise his nephews and nieces, James, Kim, Stacey and Eric Jr. He was very dedicated to his Aunt Gloria German who predeceased him on November 3, 2003. Jeffrey Houser has been a special friend for 32+ years, not only to Harry but to his family as well. Harry was a mentor to his next door neighbor's son, Steven Thompson, and like a brother to Deborah Barkley. God gave Harry a gift; a keen sense of humor. He was able to make joy out of sadness, even when he was sad. He had a special way of talkin when he wnted to make you laugh. He worked as a bartender for many years until his illness. He was an immaculate dresser. his barber, Tyrone Patterson, kep his hair well-groomed. He loved cooking, dancing and music, especially the Oldies. He accepted Jesus Christ on his last day. He departed this life on December 11, 2003. Harry will be remembered and missed by all. 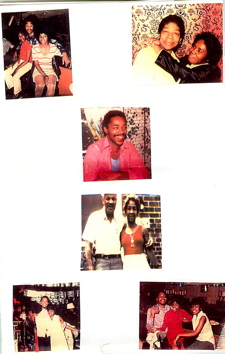 Age at Death (delete if non-applicable): 52