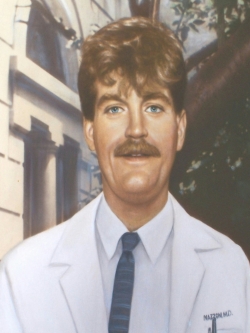 ~ Graduated from The School of Medicine at the State University of New York at Buffalo at the age of 23.

~ Board certified by the American Board of Internal Medicine

~ Died of complications relating to AIDS

~ The PCHA sexually Transmitted disease clinic was renamed the Mazzoni Clinic in his memory.

~ The Albert Einstein Medical Center Department of Medicine has established the Peter M. Mazzoni Memorial Prize to be given annually to the resident who

has displayed the humanitarian characteristics of Dr. Mazzoni

There are four separate panels of the AIDS memorial quilt that were created in memory of Peter Mazzoni and they can be viewed below.