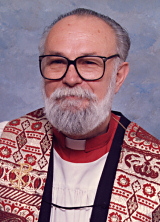 Joseph H. Gilbert was born in Philadelphia on October 4, 1930, the eldest of five siblings. His father, Joseph Henry Gilbert, was an engineer and his mother, M. Lovedy Gilbert, had worked as a nurse. When Joseph was around ten years old, the family moved to York, Pennsylvania, first living in town and then on a farm.

His parents were active in leftist politics, from which Joseph developed his identity as a rebel. He realized his sexual orientation at an early age and came out to his mother when he was sixteen years old. During his high school years, Joseph became involved in the local Episcopal Church whose ritual and pageantry attracted him. He graduated from the York Collegiate Institute which became York College.

Joseph served as a clerk in the U.S. Army at Fort Ord, California, during the Korean War. He developed a relationship with a woman there. Although this relationship was short-lived, they had a son, Gil, whom Joseph raised with the help of his family.

Joseph worked in public relations and by the 1960s was living in Sacramento where he worked for a private p.r. firm as well as for the city. He was involved in theater and developed connections in the arts community as well as the Episcopal Church. At one point he was involved in painting the Capitol dome green in honor of St. Patrick’s Day which caused quite a controversy. He was also a leader in a successful historical preservation campaign to convince the California Department of Transportation to reroute road-building that would have destroyed much of old Sacramento.

Joseph was arrested and charged for sending “a love letter” to another man through the U.S. mail. Although not sexually explicit, the letter was considered "obscene." His community colleagues in Sacramento turned their backs on him. He was convicted and served two years in federal prison in California.

After prison, Joseph settled in San Diego where his family was living. In 1970, he became a deacon in the newly-founded Metropolitan Community Church (MCC) there under "Papa" John Hose. Soon thereafter he was sent to lead the fledgling Sacramento mission that was an outreach of the San Francisco MCC. One of his first actions was to go on talk radio and tell about MCC. Retired MCC pastor Freda Smith remembers hearing this broadcast on February 9, 1971–the day of the Sylmar Earthquake. Freda went to the MCC gathering in Joseph’s apartment the next Sunday.

Following his experience in prison, Joseph was passionate about publicizing the concerns of gay prisoners and developing ministries with them. He helped initiate a lawsuit against the State of California–a suit that MCC won in 1974--that allowed MCC to have ministries and chaplains in the state prisons. He was instrumental in starting MCC's prison ministry program.

Joseph left Sacramento in 1972 to become pastor of MCC Phoenix. On November 10, 1974, he was installed as pastor of MCC Providence (Rhode Island), where he became the lightning rod for local gay organizing. He led a contingent of Providence MCC members to Worcester, Massachusetts, to march in the first gay pride parade there in 1975. That year he requested that the Rhode Island Bicentennial Commission provide space for a symposium on gay concerns and permit a first-ever gay pride parade as part of U.S bicentennial activities in Providence coming up in 1976. When this request was denied, Gilbert and others organized the Toward a Gayer Bicentennial Committee. On June 29, 1975, Joseph led a midnight prayer session on the steps of the federal building in Providence. Press reports at the time called it the first public gay demonstration in Rhode Island. Gilbert and the Committee filed a federal lawsuit against the Rhode Island Bicentennial Commission and eventually received a ruling in their favor. With only a day's notice, Gilbert helped lead the first gay pride parade in Rhode Island on June 26, 1976.

When Anita Bryant launched her anti-gay rights campaign in Dade County, Florida, in 1977, MCC leader Troy Perry asked Joseph to help lead the opposition to Bryant there. Over the next few years, Joseph pastored several MCC congregations in Florida.

In the early 1980s, Joseph pastored MCC Philadelphia. There and throughout his MCC career, Gilbert supported the start of new MCC ministries as well as nurtured new MCC clergy and leaders. He helped start the MCC of Lehigh Valley in 1984. The Revs. Brenda Cisnero-Hunt, Arthur Fleschner, Darlene Garner, Beau McDaniels and Elijah Nealy are among the MCC clergy he mentored.

On January 6, 1990, he was installed as pastor of MCC Silverlake, later MCC of the All Saints, in the Los Angeles area. He retired from this pastorate in the mid-1990s. Following retirement, Joseph lived in Tijuana, Mexico, where he helped with MCC ministries. As his health declined, he was forced to moved back to San Diego where family and friends could take care of him. He died on November 23, 2006. His memorial service was held at MCC San Diego.

Joseph is remembered by his MCC colleagues as being someone who lived simply and modestly and gave sacrificially. His deep sense of compassion led him to be a tireless advocate for those who were marginalized or left out in church and society. MCC Moderator Nancy Wilson recalls that he also had an “outrageous edge.” As she recounts: “At one early MCC General Conference, when we were ‘majoring in the minors” and people wanted to talk about how many stripes were on what collars, and dress codes, he made fun of us all by wearing an outlandish Afro wig all during the business meetings, at which he was a frequent speaker. Every time he would go to the mike for a serious matter, everyone dissolved into laughter.”

Age at Death (delete if non-applicable): 76