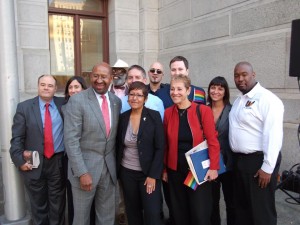 The LGBT community in Philadelphia has been deeply saddened today by the news that R. Keith Burns, the executive director of the COLOURS organization, passed away last night. Burns, 36, was a longtime HIV and AIDS activist in Philadelphia, and founding member of the House of Blahnik and the Philadelphia Black Gay Men’s Leadership Council.

PGN// published an interview this year with Burns in which he said of his journey as an activist, “Any time someone tells me that I gave them information that helped change their life or the way they live, it always has an impact on me. It moves me to continue what I’m doing.”

The Facebook community has been sharing many thoughts, memories and memorials in honor of the respected leader. Christopher Bartlett, executive director of the William Way LGBT Community Center, called Burns’ death “devasting.” Here are a few other statements:

Gloria Casaerz, director of the office of LGBT Affairs for the City of Philadelphia:

“Robert was a personal friend, colleague and fighter for all things right. I worked closely with Robert since his arrival in Philadelphia and throughout his development as a public health leader. I am truly at a loss. As we support each other in grappling with the loss of his vision, energy and dope bass beat, I want to remember the person behind the titles and responsibilities – Robert Burns, a guy from Cleveland – a son, a brother and friend.”

“Our hearts go out to Robert Burns, his family and the COLOURS organization. A fearless leader who will be greatly missed.”

“Our condolences to the R. Keith Burns family and to the COLOURS organization family. Robert was a dedicated leader in the LGBTQ community and he will be missed.”