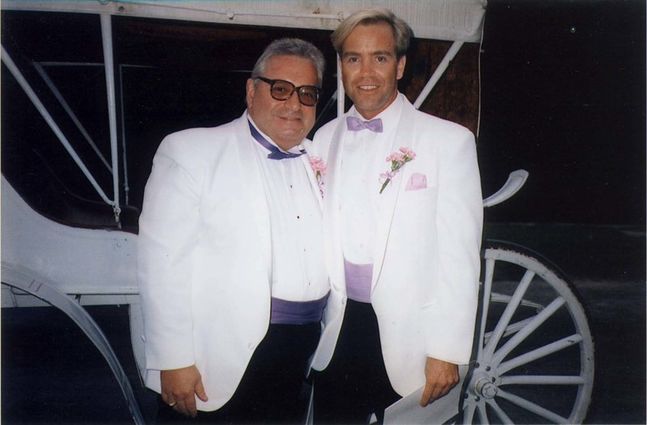 LARSON JUSTICE CENTER -- For the second time, a jury on Monday found a man guilty for the 1995 killings of two men in Rancho Mirage.

Johnny Baca, 32, will be sentenced in 30 days on two first-degree murder charges with special enhancements involving the use of a firearm. The judge ordered a probation report on Baca to assist in his sentencing.

Baca originally was tried and convicted in 1997 of the murders of John Adair, 57, and his gay partner, John Mix, 39, at Adair’s Mashie Drive home. Baca, the couple’s caretaker, lived and worked there.

That verdict was reversed by the Fourth District Court of Appeal in 1999. It ruled Baca received ineffective assistance of counsel because his former attorney made certain errors.

In the first trial, Baca was sentenced to 55 years to life in prison.

In early case testimony, Riverside County Supervising Deputy District Attorney Paul Vinegrad alleged the killing was part of a plan hatched by Adair’s adopted son, Tom, so he and Baca could collect insurance money and other assets.

But Baca denied being part of a conspiracy during his testimony later in the trial.

LARSON JUSTICE CENTER -- Taking the witness stand Tuesday, the man accused of killing two men in Rancho Mirage in 1995 repeatedly denied any involvement in their murders.

"I never hurt nobody," Johnny Baca, 32, said during several hours of testimony at his murder trial.

Baca is accused of shooting John Adair, 57, a well-to-do retiree, and John Mix, 39, his gay partner, in Adair’s Mashie Drive residence. Baca lived and worked in the home as a caretaker.

Supervising Deputy District Attorney Paul Vinegrad contends the killing was part of a plan hatched by Adair’s adopted son, Tom, so he and Baca could collect insurance money and other assets.

Composed and speaking in a low voice, Baca on Tuesday denied agreeing or conspiring to kill Adair and Mix and said Tom Adair never discussed his stepfather’s will or insurance policies with him.

When questioned by defense attorney James Silva, Baca said he was preparing to move out of Adair’s home the day of the shootings because things weren’t working out. He said Mix had agreed to give him a ride to Torrance that night.

While waiting to leave, he heard Adair and Mix arguing in another room, Baca testified.

Baca said he finally got tired of waiting for Mix and decided to leave, taking John Adair’s car even though he didn’t have permission to do so. He testified he went to stay with friends in the Carson area, where he abandoned Adair’s car and was arrested about 10 days later.

Earlier in the trial, Vinegrad’s witnesses included a sheriff’s sergeant who responded to the scene of the shootings. The sergeant testified Adair, who was still alive, said "Bac" and then "Baca" when asked who shot him.

On the witness stand Tuesday, Baca denied ever having such a conversation with Melendez or even knowing him.

Under Vinegrad’s cross-examination, Baca made statements that conflicted with earlier testimony he gave, but he explained that by saying he couldn’t recall certain things.

In a final question, Vinegrad asked Baca if he fled the valley and tried to hide out because he had "murdered these two human beings in cold blood and didn’t want to get caught by police?"

Baca was tried and convicted of the murder in 1997, but that verdict was reversed by the Fourth District Court of Appeal. It ruled Baca received ineffective assistance of counsel because his former attorney made certain errors.

At Baca’s first trial, the defense maintained the deaths could have been a murder/suicide. Mix died the day of the shooting from a gunshot wound to the head. Adair survived for 10 days before dying.

LARSON JUSTICE CENTER -- The prosecution is expected to wrap up its case today in the murder trial of a man accused of a 1995 double homicide in Ranch Mirage.

Johnny Baca allegedly shot John Adair, 57, a wealthy retiree, and John Mix, 39, his roommate, in Adair’s Mashie Drive residence. Baca lived in the home and worked there as a housekeeper.

Supervising Deputy District Attorney Paul Vinegrad contends the killing was part of a plan suggested by Adair’s adopted son so he and Baca could collect the insurance money and other assets.

The trial is Baca’s second. He was tried and convicted of the murder in 1997, but the conviction was reversed on appeal. The 4th District Court of Appeals ruled Baca received ineffective assistance of counsel because his former attorney made certain errors.

"We plan a vigorous defense," he said.

He declined to give details of the defense’s case.

At Baca’s first trial, the defense maintained the deaths could have been a murder and suicide in which either Mix wounded Adair and then shot himself or Adair killed Mix and then tried to kill himself but failed.

Mix died the day of the shooting from a gunshot wound to the head. Adair survived for 10 days before dying.

Vinegrad’s witnesses Tuesday included a sheriff’s sergeant who responded to the scene of the shootings and a former cellmate of Baca’s who said Baca confessed to the killings.

Sgt. Charles Woody testified that Adair, holding a blood-soaked towel to his head, said "Bac" and then "Baca" when asked who shot him.

Woody said he then specifically asked Adair if Baca was the person who shot him and that Adair nodded his head up and down.

Daniel Melendez, Baca’s former cellmate, said Baca told him details of how the shootings were planned and carried out.

Melendez testified Baca told him Adair’s adopted son wanted Adair and Mix, his gay partner, killed for insurance money. Baca said he was supposed to make it look like a hate crime or a lovers’ triangle shooting, Melendez testified.

Melendez denied he gave the information to authorities in hopes of getting a more lenient sentence for an earlier unrelated voluntary manslaughter conviction.

Robert Spira, the deputy district attorney who prosecuted Melendez, testified Melendez’ sentence eventually was reduced but not because of the information he provided.

Instead, a judge had reduced it because the State Department of Corrections indicated errors had been made in calculating Melendez’ original sentence, Spira said.

He said it was his understanding Baca ultimately did receive some consideration in terms of prison housing because of his cooperation.

Age at Death (delete if non-applicable):

His friends include (type your name here, or names of others): John S. Mix (partner)