Fryer was a Temple University psychiatry professor who helped create the Philadelphia AIDS Task Force and, in 1972, spoke about homosexuality to the American Psychological Association as “Dr. H. Anonymous,” with a wig and mask on, an action that spurred the declassification of homosexuality as a mental disorder, which took place the following year.

From the New York Times:

Dr. John E. Fryer, a psychiatrist who electrified his colleagues by telling the 1972 convention of the American Psychiatric Association in a mask that he was a homosexual at a time homosexuality was classified as a mental illness, died on Feb. 21 in Philadelphia. He was 65.

The cause was aspiration pneumonia, which he suffered after a degenerative lung disease, his sister Katherine F. Helmbock, said.

No gay American psychiatrist had risked speaking publicly before Dr. Fryer's appearance. When Dr. Fryer, wearing a baggy suit, a rubbery mask and a huge wig and using a microphone that distorted his voice, spoke at the association's meeting in Dallas, it was a dramatic moment in the gay rights movement, and it helped change psychiatrists' attitude toward homosexuality.

For 20 years after finding in 1952 that homosexuals were ill primarily in terms of society and of conformity with the prevailing social milieu, the psychiatric association included homosexuality in its Diagnostic and Statistical Manual, an official list of mental illnesses. Though the diagnosis was based on a departure from social norms, it stamped homosexuals as emotional deviants and lent medical authority to laws that made homosexual acts and even homosexuals' public gatherings illegal.

The classification was attacked as early as 1964, when Dr. Franklin E. Kameny, an astronomer trained at Harvard who had been ostracized because of his sexuality, insisted on television that homosexuality was not a disease, a pathology, a sickness, a malfunction or a disorder of any sort. 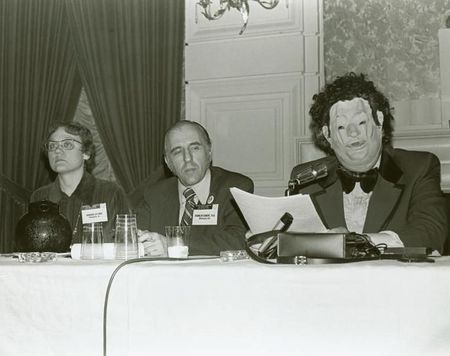 Obituary from The New York Times: