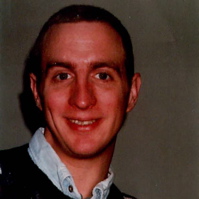 Biography: Ted was a long time activist in Philadelphia. He volunteered at We The People, SafeGuards, and other organizations. He was a Radical Faerie.

Thomas "Ted" Kirk, one of the city's leading experts on AIDS and mental illness and a former board member of We The People, died of complications from the disease on October 26th. He was 31 years old.

A memorial celebration will be held for Ted at Keystone Hospice, 8765 Stenton Avenue in Wyndmoor, on Sunday, November 22nd at 1:00 p.m.

Born in Atlanta, Ted was informed of his HIV infection at the age of 18. But "he never stopped fighting," according to Pam Ladds, director of WISDOM. "He was a gentle person, but very tough on the inside. Ted empowered himself and others through his activism. He fought as long as he could."

Ted obtained his Ph.D. in clinical psychology in 1992 from the University of Edinburgh in Scotland. On coming to Philadelphia, he became involved with Philadelphia AIDS Coordinated Therapy Services (PACTS) and Philadelphia HIV Mental Health Services, which at the time were the only mental health programs in the region specifically for people living with AIDS. As a clinician at those agencies, Ted provided therapeutic counseling and other services to several hundred people with AIDS over the next three years.

After leaving the programs, Ted engaged in a long battle to appeal the denial of long-term disability benefits which he had earned as an employee. A compromise was eventually arranged with the agency after a demonstration by members of We The People and threatened legal action. Members of We The People and Project TEACH again came to Ted's defense only a month ago, when his Medicaid HMO refused initially to admit him to Keystone Hospice.

"Ted was a true leader in the struggle to help people living with AIDS and mental illness," noted Rob Capone, interim director of We The People. "He didn't stop with his own empowerment. He constantly shared his knowledge and experience with others helping fulfill our mission of taking care of each other. Ted will be sorely missed."

Ted was licensed as a "thanatologist," that is, an expert in grief and loss, and conducted many workshops around the country on issues related to death and dying. His presentations took on special urgency in recent years as his health began to deteriorate from the effects of his HIV infection.

Ted was also a leading advocate for people with AIDS, serving as co-chair of the Philadelphia HIV Commission, a quasi-governmental AIDS planning group, in addition to his membership on the We The People board. He also participated on numerous committees and advisory groups, including one which advocates to the state for improvements in medical coverage for poor people with AIDS.

Ted also was active in the SafeGuards Project, an AIDS education program of the AIDS Information Network, and with the Community Living Room, a self-help group of people with HIV and mental illness in center city.

In a 1995 interview with the Philadelphia Gay News on his election as the first consumer co-chair of the HIV Commission, Ted said he wanted to make sure that the AIDS funding process in Philadelphia was conducted fairly.

"One of my main goals is to understand how money is distributed in the AIDS system, and to convey that to other consumers," he said.

Ted was among the first people with AIDS to be admitted to Keystone Hospice, the new care facility for terminally-ill people with AIDS in Wyndmoor. Over the last year of progressively more serious illness, Ted was supported by a loving circle of friends, including Lee Walker, his primary caretaker; Anne Bizzup, Jean and Roger Greay, Rev. Kevin Porter, and Joanne Stato.

Ted is survived by his parents, Tom Kirk and Julia Richman of Tennessee, his brother David of Atlanta, and Mark Davis, his longtime partner, of Philadelphia.

Ted and Mark, who also served on We The People's board, renewed their commitment vows in a moving ceremony at the hospice only days before Ted's death.

"It was a very beautiful and touching ceremony," Yolanda Lollis, managing attorney at the AIDS Law Project, said of the event. "Ted refused to be denied life. He continued to live, right up to the end."

His friends include (type your name here, or names of others): Chris Bartlett, Mark Davis, Lisa Dugan